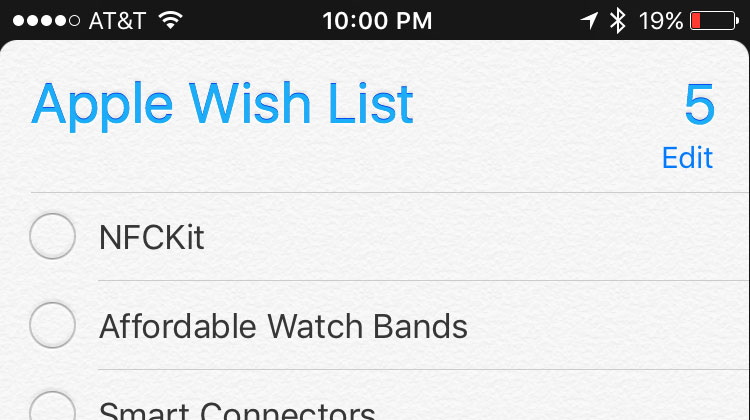 Apple makes some great products, but there are still some things I’d like to see them address.  I decided to write up a list of things I’m still waiting for Apple to do, create, or change.  I’ll try and update this from time to time, and certainly with the cycle of Apple events I may actually get some of what I ask for.  I should also note these are not yet in any sort of priority or logical order.  Just things I want.

Yeah I made that name up.  It’s a hypothetical set of libraries that would give us access to the NFC capabilities of iPhone 6(s)(Plus) and Apple Watch.  Why do we need this you ask?  Well this would allow you to walk into work with out the need for a badge, just tap your phone and go.    Hate keys for hotel rooms?  Tap your phone and the door unlocks, yes just like Starwood has but for everyone else.  Hand someone an NFC Business card, they tap it with their phone and instantly have all of your contact info.  There’s a host of good NFC use cases and right now we have like 1% of them on iPhone.

$50 for a rubber watch band.  Sure it’s “fluoroelastomer” which is a fancy word for elastic rubber.  Sure according to Phone Arena (http://www.phonearena.com/news/The-Apple-Watch-Sport-straps-are-all-made-of-fluoroelastomer—here-is-what-this-means_id67029) it’s an expensive polymer used for “fuel-distribution systems”(I’ll admit fuel if it’s gasoline can really eat away at stuff).  Sure they finally added a bunch of colors for variety.  But $50 for a rubber watch band is still just too expensive.  Even the recently announced Nylon bands still come with a hefty price tag of $50 (the non-Apple Clockwork Synergy bands start between $26.95 and $29.95 based on size).

Smart Connector(S) and Pencil Support for All

I’m not sure that the Smart Connector gives us that much more then a lighting port, but it does seem to be more convenient.  I’m not sure I need it on a phone either but certainly on all sizes of iPad.  Having it on a 9.7″ iPad is great.  The same goes for Apple Pencil, I’d love to see that trickle down to the Mini,  I suppose I can see it not being on the Air 2.

Look we have this on Apple Watch, so when it comes to iPhone what’s the hold up?  Samsung has had it for years.  Plural.  Multiple product generations.  And don’t tell me I don’t need another adapter or part or thing to put on my nightstand.  I have an Apple Watch.  I already need something else plugged in.  If you’re mantra is to reduce ports, and size, and not need to sync with a computer via a cable… why haven’t you added inductive charging.  Starbucks has them all over, which yes I know and Apple solution probably won’t be compatible with those.  However, when was the last time Apple really waited for something to become a standard?  Isn’t Apple the company that’s setting/making standards at this point?  Think Thunderbolt, Lightning, Retina displays,

One Charger for Everything. Or at Least a 2 or 3 USB Port Charger

You sold me a phone, a watch, an iPad, and a laptop.  It’s only fair you sell me something I can at least charge my watch and phone with.  My travel bag has to have 2 wall warts in it at all times, and that doesn’t count my Macbook Pro Retina charger.

New devices and operating systems are constantly being released.  We’ll just have to see how many items from my Wish List Apple creates.